St. Patrick’s Golf Club, Downpatrick (formerly, Downpatrick Golf Club) had its official beginning in an advertisement for a public meeting, which appeared in the DOWN RECORDER on the 12th October 1929. All four signatories to the notice played one way or another, significant roles in the Club’s formation and collectively must stand as the ‘Founding Fathers’.

Not long after the Public Meeting the formation of the Club proceeded at a phenomenal speed. On Friday 29th November 1929, the first General Meeting took place. Without as yet a blade of grass to play upon, the Club could boast a municipal membership of 225. The Steering Committee had disposed of the notion of seeking a municipal course and had decided to go for their own Club.

At the General Meeting the first Council in Downpatrick Golf Club’s history was formed: 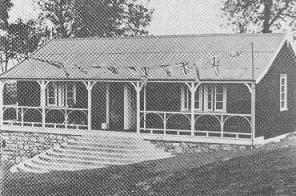 The first few Council meetings were held in the Northern Bank. At the Council Meeting in January 1930, Mr. J. McMeekan was appointed Hon, Secretary and Mr. Wright was appointed Hon. Treasurer. At the same meeting it was agreed to purchase an army hut for £30 and Mr. T. McLean was invited to prepare plans for the conversion of this hut into a Clubhouse. The siting of the Clubhouse was to be left in the hands of the Hon. Secretary, Mr. T McLean and Mr. R.H. Patterson, Surveyor.